I Made an Eyeshadow Palette Inspired by Les Misérables 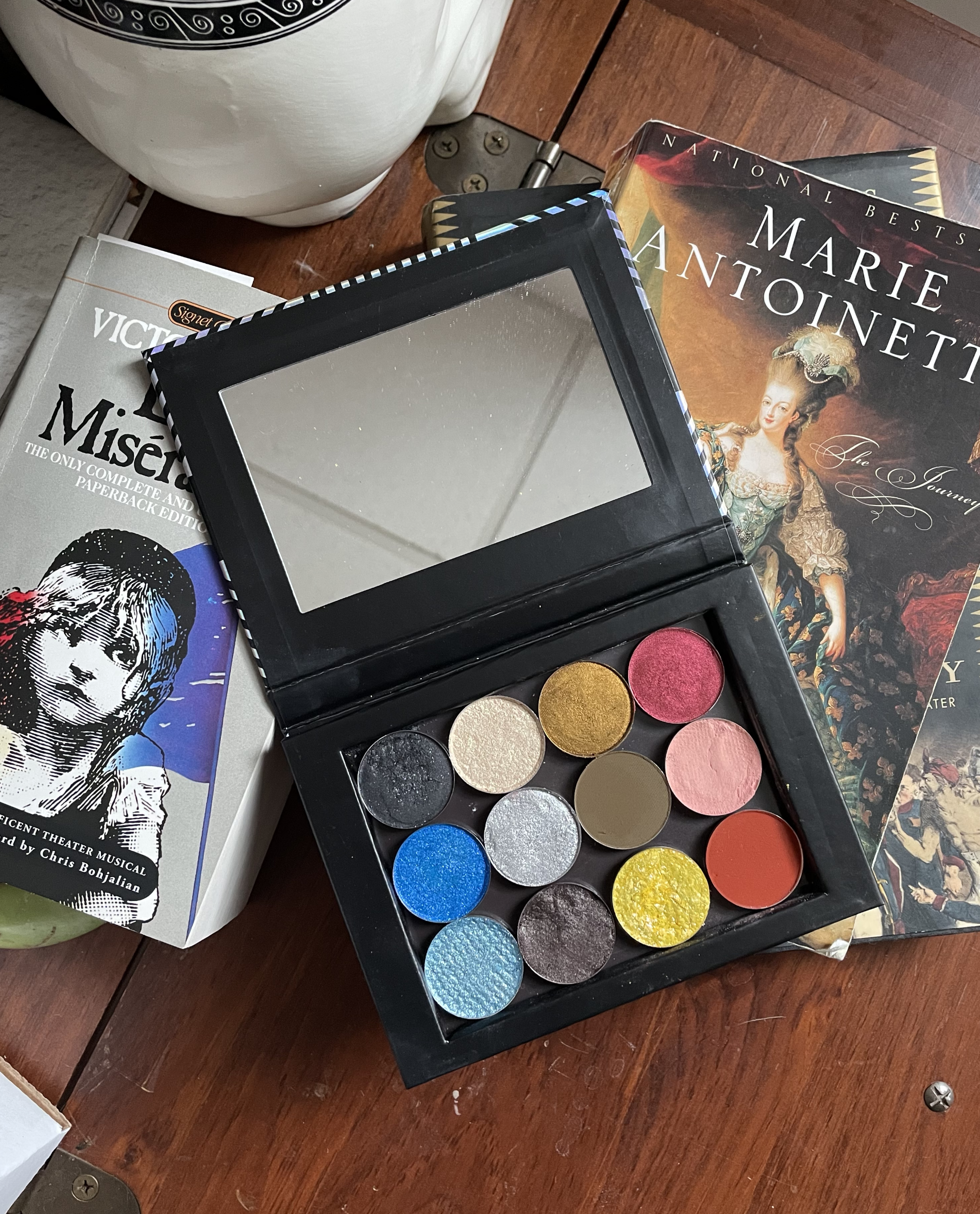 I found myself wanting a Les MisÃ©rables Eyeshadow palette, so I made my own!

Some people like sports, some people like to cook, I just happen to enjoy 19th-century French Literature to an obsessive degree. Whether it’s the book, the many film reproductions, or a stage performance, I have an unhealthy obsession with Les MisÃ©rables. Makeup is my other great love, so I decided to combine the two and create my own Les MisÃ©rables palette with indie eyeshadow singles.

How I chose the colors

When it came to the actual color palette, I decided to focus on the 2012 film adaptation of Les MisÃ©rables. It has the richest color palette and it’s the one I’ve seen the most, maybe 2 or 3…. hundred times. The costumes and sets are stunning and vivid.

I also attempted to loosely follow the French Flag, the tricolor blue, white, and red, which is historically rooted in the French tradition of Revolution. I’ll try not to get off on too much of a historical tangent, but after the French Revolution of 1789, the people of France began recreating the flag.

Les MisÃ©rables centers around the June Rebellion, which actually took place 40 years after the French Revolution in 1832. The people’s rebel party, who was ironically titled the Republicans, wore the tricolor as a rosette as a symbol of their protestation of France returning to the monarchy by appointing Louis Phillipe as king in 1830. Therefore, the French flag has a lot of importance when it comes to Les MisÃ©rables.

On to the Les MisÃ©rables Eyeshadow Palette!

I’m going to go through each shade and write a bit about why I chose that color along with a scene from the movie that I pulled it from. I’ll also link to the actual single shadow in each one.

If you’re curious about making your own custom eyeshadow palette with indie single shadows, check out our guide. We also reviewed our favorite indie eyeshadow brands here.

The Night That Ends At Last

This shade represents the dark 948 years of the oppressive monarchy of France. For so long the poor suffered while the rich indulged. Imagine fighting tooth and nail for a scrap of bread while the King and Queen live in a massive castle filled with the finest of everything the world had to offer. The premise of Les MisÃ©rables is Jean Valjean’s 19-year prison sentence for stealing a loaf of bread to feed his starving sister and her child.

‘The Night That Ends At Last’ is a line from the song “Red and Black”. This shade has shimmer in it, so even though it’s black as night, hope for a better future is still there, glimmering.

This eyeshadow is Oil Spill by Copacetic Cosmetics.

Eponine is tied for my favorite character along with Gavroche; did you know they’re siblings? This shimmering light gold is the twinkle in Eponine’s eye. It’s the shred of hope that Marius could love her as much as she loves him. She struggles with the trauma a lifetime of poverty has handed her, and living in a fantasy keeps her alive. This shade represents that beautiful fantasy.

This eyeshadow is Atomic 26 by Collective Cosmetics.

After Fantine has cut off her hair, sold her teeth, and succumbed to prostitution to keep her daughter alive, she gets the chance to ask for one final wish. Jean Valjean knows he owes the world for his own retribution, and he makes Fantine’s wish his life’s mission.

He adopts Fantine’s daughter Cosette and raises her as his own, gives her a happy childhood, and protects her as much as humanly possible. This shade is a deep, rich gold with a tinge of muddiness. Fantine is found dying in the streets, blood at her lips, with one final request from life. The love of her daughter is pure gold, even when Fantine is dying in the mud of the streets.

This eyeshadow is Laputa by Copacetic Cosmetics.

The Blood of Angry Men

This is another line from “Red and Black”, representing the red rage that fuels rebellion after centuries of oppression. Anger is often the fuel needed to launch society forward. All the frequenters of the ABC Cafe, schoolboys with their lives ahead of them, were willing to give their blood for France.

This eyeshadow is First Kiss by Copacetic Cosmetics.

Blue on the tricolor French flag represents nobility and liberty. It’s a pure shade of blue, symbolic of the strength of the French people. In France, the government is afraid of its people, whereas, in most places, the people are afraid of their government. This vibrant shade of blue echos the liberty accomplished by the many lives given during the century of rebellion it took to free France from the oppressive monarchy.

This eyeshadow is Just Royal by Shine By SD Cosmetics.

The silver candlesticks are the start of this tale, given to Jean Valjean by the charitable priest. Jean Valjean is caught stealing silver from a priest who gives him a warm meal and a place to sleep after he leaves prison. He is caught and returned to the priest, expecting death, or worse, a return to prison. Instead, the priest has mercy on Jean Valjean, telling the police that he gave the silver to him, adding that he forgot the best pieces, the two silver candlesticks. It’s with this silver, Jean Valjean starts a new life. He dedicates it to the good of others, attempting to repay the universe for the second chance it gave him.

This eyeshadow is Tedus by Copacetic Cosmetics.

Many English students have cried in despair at the length of Victor Hugo’s epic novel, especially at the 15 pages that are dedicated to the history and layout of the sewer system of Paris. Am I the only one that finds this interesting?? The sewers also play an essential role in Jean Valjean saving Marius’s life, leading to Cosette’s happiness, which is Jean Valjean’s life mission.

This eyeshadow is Murky Waters by Copacetic Cosmetics.

To be completely honest with you, Cosette makes me roll my eyes. I don’t really understand the obsession with Marius for either Cosette and Eponine. Imagine if they just cut out the middle man and got together instead?! That’s just me dreaming that every story has a queer love story embedded in it. Anyways, Cosette’s love of Marius is an important element of the story, and since she’s a pretty, blond, singing little angel, I thought this color was a good fit.

This eyeshadow is Rose Petal by Copacetic Cosmetics.

Arguably the most epic and singable song in the musical, One Day More is the early morning blue, the pastel shade of a robin’s egg, the color of new beginnings. I’m sure my neighbors aren’t being that optimistic about this song when I belt it in the shower and sing all the different parts. ONE… DAY… MORE!

This eyeshadow is Atomic 22 by Collective Cosmetics.

If you needed proof that ACAB, here it is. Javert is the most annoying person ever, to the point where I’ve just accepted that he just has a really big gay crush on Jean Valjean, and his internalized homophobia is driving him to stalk this man for 30 years. Okay, there I go on a gay tangent again.

More likely, Javert is obsessed with taking down Jean Valjean because he sees the things he doesn’t like in himself in Jean Valjean. He was born in a prison, never knowing his convicted criminal parents. He spends his entire life obsessed with the law and upholding it. In the end, it makes him like the most annoying hall monitor ever. This color is dark and murky like his heart.

This eyeshadow is Steam Powered by Copacetic Cosmetics.

Castle on a Cloud

Cossette is only annoying as an adult. As a child, she’s really cute, especially when she sings this song with her little doll which is actually just a ball of dirty rags. This magical golden flakie is the shimmer of her blonde hair and the hope that lives in her heart.

This eyeshadow is Chrysanthemum by Copacetic Cosmetics.

Yes, there is a Les MisÃ©rables fandom, and yes, Enjolras is the center of that fandom. This color sings, “Marius, who cares about your lonely soul?!” Besides his clear friends-to-lovers interest in Grantaire, Enjolras’s entire life is centered around planning and executing the June Rebellion. He dies with the red flag of rebellion in his hand.

This eyeshadow is Hanami by Copacetic Cosmetics.

Now Announcing Our Partnership With Goldn

Signature Beauty Products For Euphoria Characters Based On Their Personalities

And yes, we picked products for Nate, Cal, and Fez, too. Have you ever wondered…