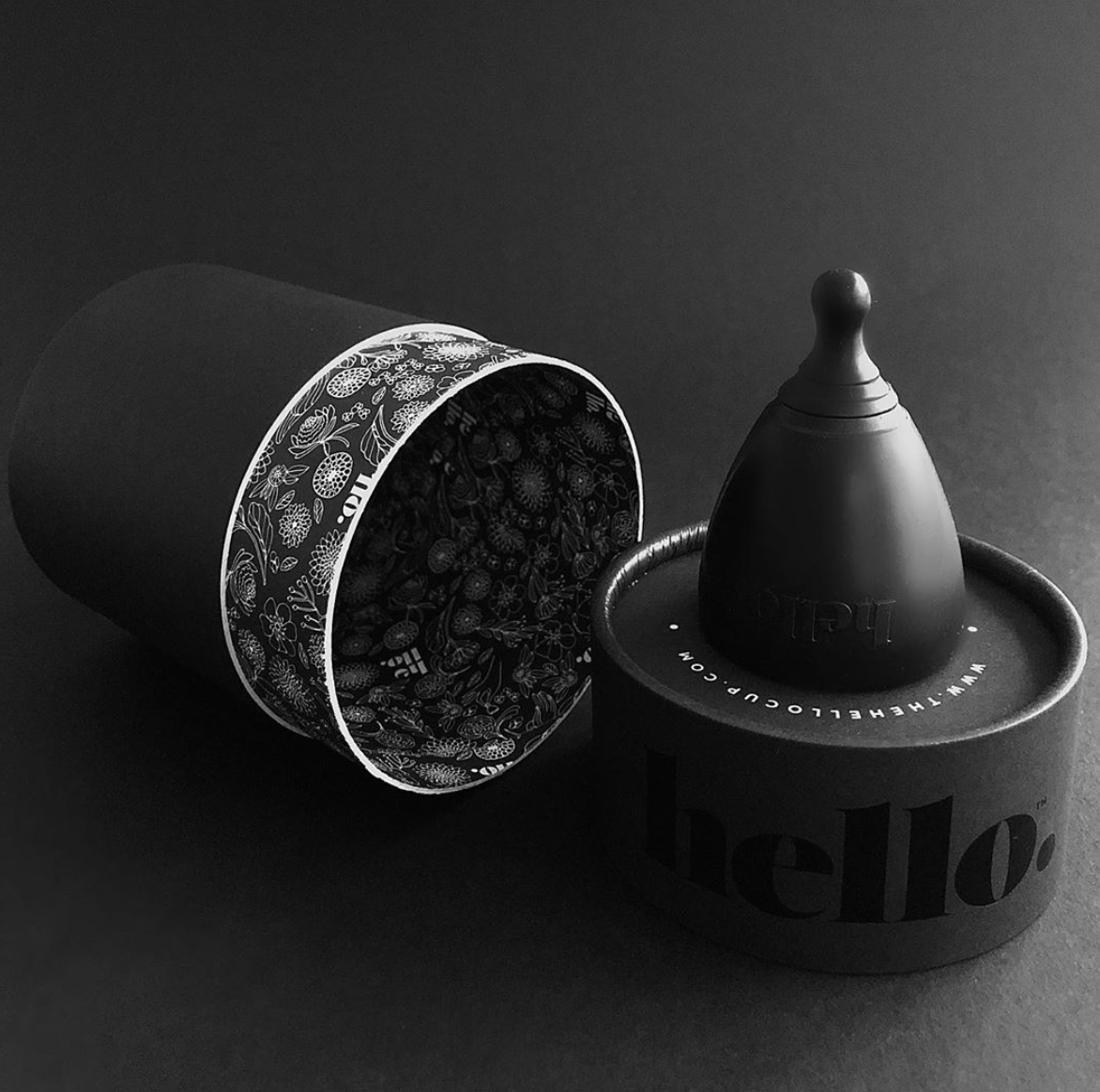 and it’s important for more reasons than you may think.

Hello Cup has become my favorite period cup brand for comfort, fit, style, and just overall awesomeness. Check out my review of their cups and reusable pads here, where I talk more about the general product and the amount of waste it reduces, as well as it’s health benefits.

A little while ago, Hello Cup announced that in celebration of their anniversary, they were releasing a new black version of their period cup, complete with its own packaging to match. It looks absolutely amazing, which is something I never thought I would say about a product used for menstruation.

As a New Yorker, I know black is the best color, and everyone looks good dressed in black from head to toe. My first reaction to the goth period cup was that it looked fire and I needed one. A black chalice that holds my blood.. what could be more metal than that? After stalking Hello Cup’s comments, I realized something that I hadn’t even thought about, which was how something like a simple color change of a product like this can play into gender equality for an essential item like a period product. It starts with a fairly simple concept.

Not all women have vaginas, and not everyone with a vagina is a woman.

Gender is “Gender is the range of characteristics pertaining to, and differentiating between, masculinity and femininity.” Sex is “either the male or female division of a species, especially as differentiated with reference to the reproductive functions.” (both definitions are from dictionary.com) Put in basic terms, gender is how you identify, and sex is your biological characteristics. Only 4-13% of self identified trans masculine people get gender confirming ‘bottom’ surgery, according to the US National Library of Medicine and National Institute of Health. While a larger percentage of transpeople take hormones, this doesn’t stop your period immediately, and for some, it never fully stops your period. Why am I telling you all of this?

If you walk down the ‘period aisle’ at your local store, you’ll be hit with an explosion of pink, flowers, and sparkles. Most period cups that I’ve seen on the market come in one color – pink. They have overly feminine packaging and have names that include words like ‘diva’ and ‘intimina’, or are even named with a woman’s name like Eva and Lena. This is something I haven’t noticed because I’m a woman with a vagina, and I’m not forced to use certain products that don’t align with my identity based on necessity.

One of my closest friends since 4th grade is a trans man, and I’ve seen, since we were 11 years old, the pain and struggle that he’s experienced being attacked by other kids, teachers, and society as a whole. After years of hard work, he now works in parks and forestry on location in back country wilderness. He has been on testosterone for 8+ years now, but still experiences some challenges with finances and insurance that keep him from getting his testosterone on time, which can cause menstruation. With his job, he is often outside and camping for days at a time with crews of other men, where his identity being revealed could be potentially dangerous or cause him to loose his job. Carrying around a bunch of tampons and pads, or a bright pink device with a name like ‘Intimina’, would not be safe or discreet for him. A black hello cup is something that he could use knowing that he would be safe to wear and won’t leak for up to 12 hours at a time, that ‘changing it’ is a quick and discreet process with no wrappers, applicators, or waste, and it’s black and hard to notice. Hello Cup was actually kind enough to send both my friend and I the Goth Hello Cup, and explained to me that both their brand name and color variety were made with gender diversity in mind.

Aside from the mere practicality of the product, a genderless, discreet period product could alleviate the gender dysphoria that some experience using overly feminine period products, or period products at all. There are so many things that I take for granted on a daily basis as a cisgendered person that could cause issues and discomfort for someone trans. I appreciate the thoughtfulness that Hello Cup puts into their brand, which sets them apart from other period cup brands, not only in comfort and style, but in accessibility and diversity.

This post is not sponsored, although the product was complimentary for my review. The scientific journal referenced for the statistics mentioned in this article are linked above. The personal anecdote from my friend was shared with permission of my friend in the hopes that his story could potentially help someone else.

Interview with the Founder of Serenade

Serenade is a new plastic-free, zero-waste online beauty retailer, which is an answer…